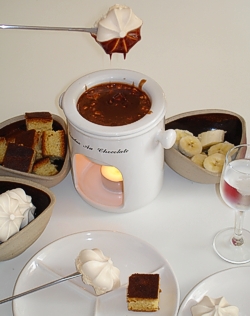 Sometimes it can be difficult to pin down the actual point of origin of a fad food or drink, like Irish coffee or the Singapore sling. So it's a pleasure, when someone asks "Where did chocolate fondue come from?", to be able to point to a spot and say with certainty, "Right there". In this case, the spot is a long-lost New York restaurant called Chalet Suisse.

This restaurant (routinely misspelled in many Web citations as "Chalet Swiss", and sometimes confused with the North American restaurant chain Swiss Chalet) was initially located, from the late 1940's until the mid-60's, at 45 West 52nd Street in Manhattan. Then in 1966 it moved to 6 East 48th Street, where it remained until the late 1980's: a long lifetime for any American city restaurant, and for one located in Manhattan, almost the equivalent of a geological age. Its owner -- originally, at the old address, its chef and then its chef-patron -- was a Swiss-born gentleman named Konrad Egli, or (to his friends and frequent guests) just Konni.

Chalet Suisse was the kind of place that inspired quiet but profound loyalty among the New Yorkers who knew about it. It's still remembered affectionately by such chef-luminaries as Jean Georges and seasoned food writers like William Grimes and Mimi Sheraton, who called it "altogether felicitous". From the start Chalet was known as a place that honored the culinary traditions suggested by its name: steady, reliable Swiss regional food, carefully handled, with nothing but the best ingredients involved in the process. James Beard wrote admiringly about the place while Konni was still just the head chef there. 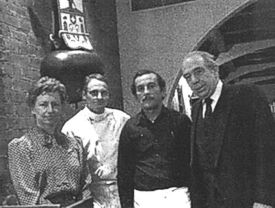 Some time between the late 50s and the early 60s, Konni bought out the restaurant's former owners, Alfred and Clara Baertschi, and became owner-manager of Chalet Suisse. He quickly proved himself an innovator, and not just in the food department: he was one of the first restaurateurs in New York to install air conditioning, a move that quickly gave his business a boost during the sizzling New York summers. And for all the essentially conservative nature of the food at Chalet, Konni wasn't afraid to make changes or try new things there either. As the move to the restaurant's new location just off Fifth Avenue drew closer in the mid-60s, Konni apparently started considering what new items he might add to the menu to create some buzz around the launch.

As it happens, very close to the new location -- one block north on Fifth, at the corner of 49th -- was the Swiss Center, which housed (along with the national airline Swissair and the Swiss bank UBS) the New York branch of the Swiss National Tourist Office. In his dealings with the Swiss Center, Konni was introduced to a PR lady named Beverly Allen. (The best-known source confirming this meeting and what came of it is probably Nika Standen Hazelton, author of The Swiss Cookbook.

Nika gets the name of the restaurant a little backwards and in the wrong language, but at least she was writing during the right time period.)

Ms. Allen appears to have been working in conjunction with the SNTO and a Swiss-based chocolate company to publicize an interesting new product just then arriving in the USA from Switzerland -- a strange looking chocolate-and-nougat bar that could be broken into individual pieces, each shaped like a little stylized mountain. The stuff was called Toblerone, and Ms. Allen and the chocolate makers were looking for a way to launch it in the USA with a bang. After some consideration, Konni hit on the idea of using the new product in something equally new and interesting: a sweet fondue.

"The Swiss thought we were crazy," Ms. Allen says in the NY Times article cited above. But Konni, unconcerned by his people's opinions about his mental health, soon found a way to produce the desired result. Like so many Swiss things, it was incredibly simple, but also absolutely dependent on high-end basic materials -- in this case, nothing but heavy cream, Toblerone, and that favorite Swiss firewater, kirsch or kirschwasser.

The new dessert was launched in the restaurant's new 48th Street location not long after its opening. Nika Standen Hazleton fastens down the earliest launch date for us by specifically mentioning that the dessert "caught on like wildfire at the restaurant ... on 48th Street", so this means that chocolate fondue's genesis occurred no earlier than 1966 -- rather later than suggested by some online sources that push the invention back into the fifties. Possibly some of those sources are confused by Konni's presence at the restaurant's earlier 1950s incarnation. More confusion may be due to the fact that chocolate fondue was not Konni's only innovation. Sylvia Lovegren, in Fashionable Food: Seven Decades of Food Fads,

asserts that Konni was responsible not only for chocolate fondue, but also for the invention of fondue bourguignonne, in which fresh meat is dipped into a fondue pot full of hot oil, then (once cooked) eaten with savory sauces.* This is confirmed by Konni's former chef Dietmar Schlüter, who pins down the date of introduction of fondue bourguignonne as 1956 in his cookbook Chalet Suisse: Fondue, Veal and More.

Chalet Suisse is long gone now, its former space at 6 East 48th Street occupied initially by a pasta place, then a juice bar, now a pizza and breakfast-sandwich place called Toasties. It doesn't matter. Those of us who ate there can't walk past without seeing the ghost of that demure old facade with the red awning over the door, and remembering the characteristic "thump" that the heavy, rustic wooden inner door made when the outer door opened. Konni, too, is gone. He and his charming wife Elisabeth moved to Florida, glad to leave the restaurant game behind them and relax into a happy retirement of bridge cruises. But Elisabeth died suddenly, and Konni -- never one to keep a lady waiting, especially not one he loved so dearly -- soon followed.

Nonetheless, the chocolate fondue he cooked up -- literally -- survives him all over the world. It's even made its way back to Switzerland... which probably amused him no end.

We've recently altered our recipe (the original of which came by way of Nika Standen Hazelton's cookbook) to reflect the one in the Chalet Suisse cookbook by Dietmar Schlüter. Dietmar notes that though the original Chalet Suisse chocolate fondue recipe did not contain dark/bitter chocolate, the composition of Toblerone has changed over time and become significantly sweeter; so to reproduce the original effect he adds Tobler Extra Bittersweet chocolate to compensate.

Please note: this recipe is not suitable for chocolate fountains, as the almonds in the Toblerone will interfere with their workings.

First prepare the things you're going to dunk in the chocolate. At Chalet Suisse, each guest was served with:

Once everything is assembled, start the fondue. You need:

Break the Toblerone and Tobler bittersweet chocolate into their separate pieces and place in the top of a double boiler, or in a small saucepan set inside another one partway full of hot water. Pour the cream into a small pan and heat separately.

When the chocolate is melted, pour in the heated cream and stir well until blended. The mixture should be very liquid and glossy. (The bits of almond in the Toblerone will usually rise to the top: this is normal.)

Stir in the kirsch or other spirit just before serving.

Serve in a small fondue pot (you can get ones made especially for chocolate fondue) kept warm with a candle or other gentle heat source.

A final note: one online source claims that the genesis of chocolate fondue as described above is a myth and that "recipes for chocolate fondue appear as early as 1930". Unfortunately all the recipes quoted by that source -- despite the use of the word "fondue" -- are actually for some kind of cake. (Since when do you turn a fondue into a buttered dish and bake it?) So this theory, unfortunately, fails.

*Various sources list the date of this innovation as anything from 1952 to 1956depending on who you talk to: so this is something that would have happened at the older Chalet Suisse location on 52nd Street. It was around that time, though, that fondue in general started to take off big time in the USA, and it's not an unreasonable assumption that Konni was somehow involved.

See also this interesting citation confirming that fondue bourguignon cannot be traced back any further than 1956.